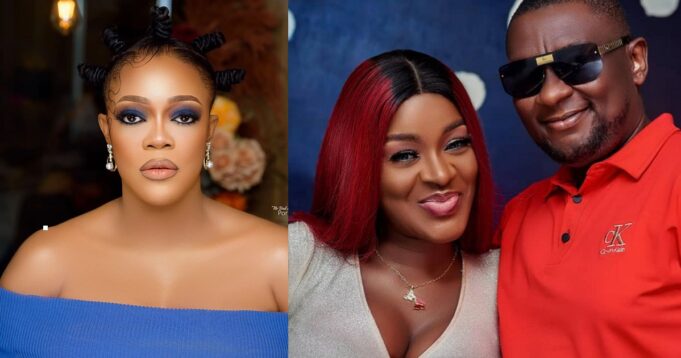 Nollywood actress, Eve Esin has reacted to an alleged report that her colleague, Chacha Eke, snatched Austin Faani from her years ago.

This comes weeks after Chacha Eke took to social media to announce her separation from her estranged husband, Austin, while noting that she’s done pretending that all is well in their marriage.

”Many have died pretending all is well whilst wishing, hoping and praying for a better tomorrow.

“For the 2nd time in 2years, I am here again on social media boldly declaring that I am done with my marriage. My long overdue/relentless stance on this is of course no news to Austin Faani, the doctors and my parents.

“If push comes to shove & suddenly I am incommunicado, my lawyers, the welfare department and the Nigerian police force have my testimonials in recorded video clips/statements set for public release on all social media apps and national newspapers.“

Following their separation, controversial blogger, Gist Lover, in a post shared on Friday, July 15, alleged that Austin was formerly in a sexual relationship with actress Eve Esin.

However, Chacha Eke snatched him from Eve after she was brought into the Nollywood scene and given a chance at acting.

According to Gist Lover, Chacha started dating Austin because she wanted to rise to the top of her career quickly.

It was also alleged that Austin is a well-known gay who used to pimp Chacha out to wealthy men in exchange for money.

Following the controversial post, netizens rushed to Eve Esin’s page to flood her with messages and comments in order to hear her side of the story.

In reaction to the comments, the actress who didn’t confirm or deny the report wrote,