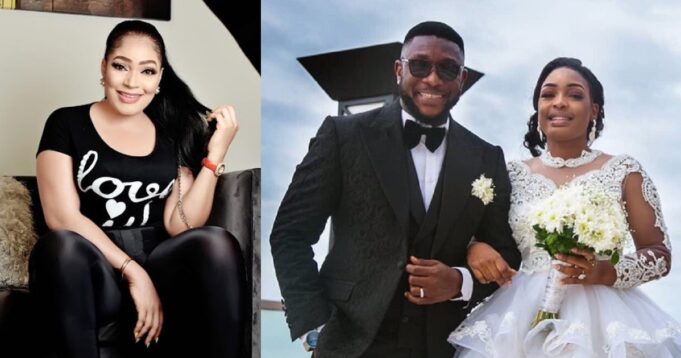 Nollywood actress, Sophia Williams has taken to social media to gloat following alleged reports that her ex-husband’s marriage to her colleague, Nuella Njubigbo, has crashed.

Sophia Williams, who is Tchidi Chikere’s ex-wife and mother of his 3 sons, was left heartbroken in 2014 after her ex-husband dumped her for Nuella. The duo described their union as “Made in Heaven” and held a lavish white wedding to make their union official.

According to new reports making rounds on social media, Tchidi’s marriage to Nuella has hit the rocks and they’ve unfollowed each other on Instagram.

In reaction to the rumour, Sophia Williams took to Instagram to throw a subtle shade at the couple.

“Wetin dey happen to one love made in heaven?
Just asking for a friend who is not on Instagram, e choke”

Sophia’s post has been greeted with mixed reactions. Some fans opined that the turbulence in her ex’s marriage is simply karma.

j_boy86 wrote, “Do to others what u will like them do to u..life is so simple,do bad and expect bad and do good and expect good..celebrities and failed marriages are 5 and 6.”

mhz_ming wrote, “One thing about karma is that she is loyal and committed to her ministry! She never fails. Kai”