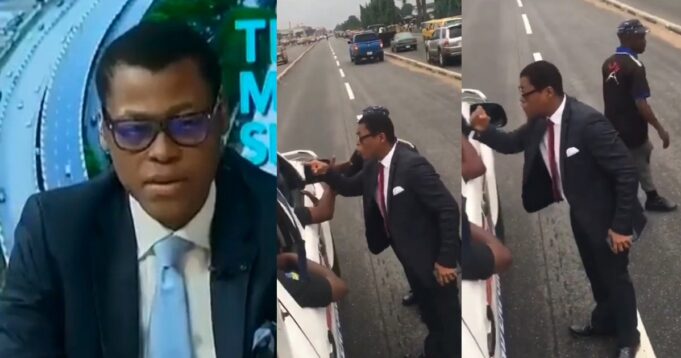 Arise Television broadcaster, Rufai Oseni has tendered a public apology to the appropriate parties after he was convicted for driving on a BRT lane in Lagos.

In the last few days, the presenter has repeatedly been in the news for driving on a lane dedicated to BRT buses in Lagos state and resisting arrest by men of the Nigerian Police Force.

A video showing his altercation with the policemen and how he threatened to call the Governor of Lagos state, Babajide Sanwaolu, on them also went viral on the Nigerian cyberspace.

Following the incident, he was charged to court for flouting Lagos State Transport Law of 2018 and found guilty of the crime after which he was asked to pay a fine of N70,000 before his car was released to him.

After reflecting on his actions, Oseni has publicly apologized for his actions during a live broadcast show on Arise TV this morning.

“I have to read the personal message I did. As many of you know in the last two days I have been in the news for the wrong reasons. This has resulted in needless distraction for my friends, family, members of the public and for all my colleagues on Arise News.

“I will like to apologise to all parties over what transpired during the incident with the police when I was stopped while driving BRT bus lane. I dare not lay claims to know it all. Lessons have been learned from this entire episode. This has been a really humbling experience for me.

“I like to use this opportunity to express my gratitude to all those who have reached out to me in the last two days for their guidance and counselling. Thank you, everyone. God bless you all and please let’s continue to strive to make our country a better place for all. I apologise.”

Watch a video of his apology below.