Home News “We broke about four windows to rescue him” – Neighbor of man... 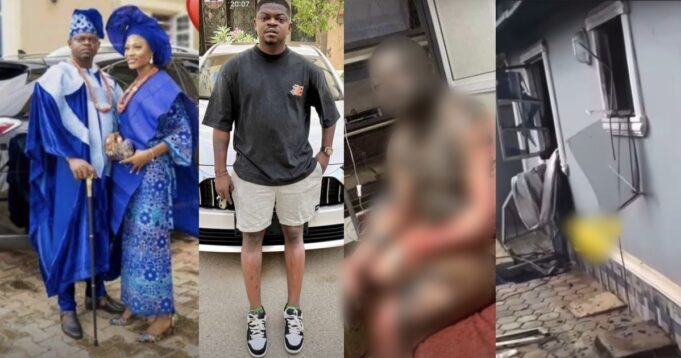 A neighbor of the Cairo-based businessman, Bolu Bamidele, who was allegedly set ablaze by his wife, Ife Bamidele, in Osun state for having a child with another woman has spoken up on the incident.

YabaleftOnline reported that Bolu who came to Nigeria from Cairo to celebrate with his wife on her birthday, was set ablaze in their home in Obokun Local Government Area of Osun State, near the state capital, on Sunday, July 17.

He was rushed to a hospital for medical intervention but sadly died from the burn injuries  on Tuesday.

It was gathered that Ife set him on fire and locked the door against him before fleeing the scene. However, she has officially been declared wanted by the Osun state police command.

A neighbor of the couple, identified as Gabriel Adejare, has narrated how he discovered that the couple’s apartment was burning after he returned home from work around 7:30pm.

Gabriel who disclosed that he saw Ife walking bare-footed in the community said,

“When I moved closer to my house, I noticed smoke emiting from the house where Ife was staying. I observed for a while, then I realised that the house was on fire.

I rushed to the scene and met Ife’s younger sister, with some elders, in front of the gate. She then informed me that her elder sister and the boyfriend were quarrelling.

While she went out to call elders to help resolve the issue, the house had already been set on fire.

Her sister, Ife, had angrily left the house, locking all the doors, while the fiance was still in his bedroom. Instantly I tried to put off the fire, but I could not. I called for more help in the neighbourhood and we mobilised to extinguish the fire.

We were pouring sands and water on the fire and trying to break in through the window to rescue Bamidele.

We broke about four windows and burglaries before we could get in. We were able to rescue Bamidele from the fire after about 40 minutes.

We found him beside a burnt bed and we rushed him to a nearby hospital and he was referred to Osun State University Teaching Hospital, Osogbo and later referred to Ibadan for treatment.”