A Journalist with The Nation newspaper, Olola Seun Akioye has shared the moment a relation to one of the recently released 82 girls called him to share joyous news of her return on 6th of May, 2017. 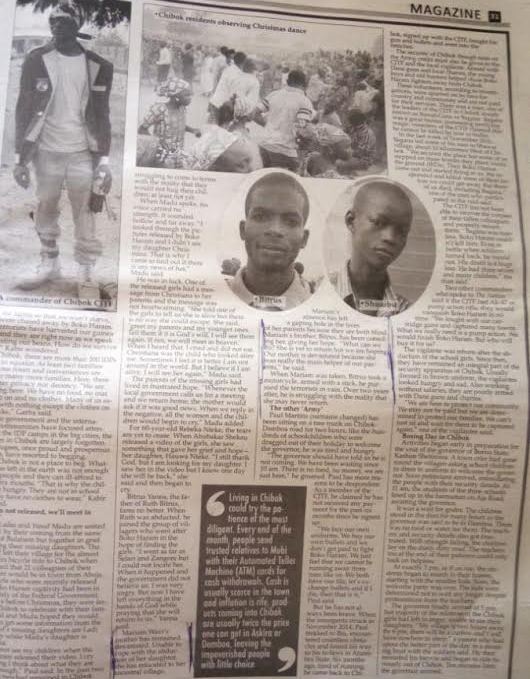 He recounted this moment in order to prove that the release of the abducted school girls is not in anyway a SCAM as quite a lot of Nigerians think it is.

I received a phone call today from Bitrus Wavi, a resident of Chibok in Borno state. During my last trip to the town last December, Bitrus was one of my guides, he borrowed me his bicycle to ride around and would take me to the homes of parents whose daughters were missing. After a hard day’s work, me and Bitrus would relax under a shed, eat suya and coke. Bitrus’ sister Mariamu was among the girls abducted, the day it happened, he jumped on his okada, armed with a stick and pursued the terrorists foolhardy. His parents, who are both blind have relocated to the farm, unable to cope with the incident. But Bitrus never allowed his personal sorrow to change him, he rejoiced with the girls who returned and mourned with those still missing. I kept in touch with Birtrus and other wonderful families in Chibok like the Allen family who housed and fed me, I slept in their best room and ate the best food. (God bless them). So Bitrus called and told me excitedly .” My sister has been released, she is one of the 82 girls released.” I have never been happier, seeing this happen and you are a witness to history. Thank you Jesus, we look forward to the rest coming home. Thank you Journalism, to those still saying it is a scam, I will not abuse you, may the Lord forgive you, that sort of wickedness takes people to hell straight. Think of Bitrus’ blind parents and the grieving mothers of Chibok. If some of the girls can’t speak English, it is not only in Chibok that SS 3 students can’t speak English, I did several studies in Kano, Adamawa, Bauchi, went to their innermost schools, Victor Emeruwa can bear me witness, the students cant speak english, it is the problem of the North. Here is the marked portion on my story on December 31n 2016 in The Nation where I mentioned Mariamu and Bitrus. All is well, it ended well.