Home Viral “I don’t collect change. I will collect better money and not hide... 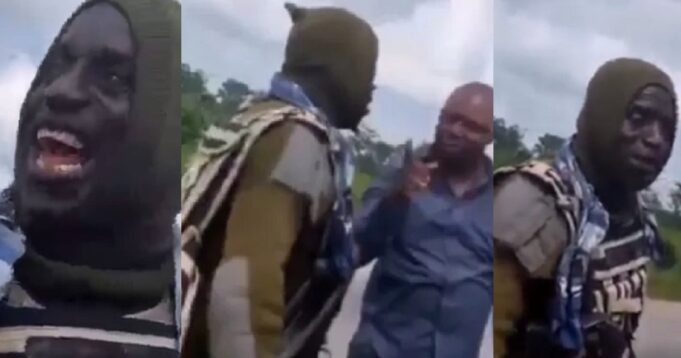 A police officer has been caught on tape boldly seeking bride from motorists while reiterating that he does not collect “change”.

In the video that was filmed by road users, the officer and his colleague stopped a vehicle and demanded money from them after inspecting the car papers.

The officer was then offered an undisclosed amount, but he declined it and stated he only collects a large sum.

The bribe-seeking officer also declared that even the IGP knows he collects money from motorists. According to him, the road is his “market” and the commuters are his “customers”.

In related news, a bribe-seeking police officer employed a humorous and quite unusual tactic to extort a motorist, as seen in a viral video.

In the viral video, the police officer who had stopped a motorist on the grounds that his vehicle papers were incomplete, emphasized that he is a man of God and that God ordered him to halt the driver.

The officer spoke in tongues to prove to the motorist that he was indeed spirit-filled and asked the man to “package something” for him.

When the motorist refused to buckle and insisted that his papers were complete, the officer said the man had disobeyed “the speaking of the lord” and asked that they go to the police station for more senior officers to intervene.

According to the man who shared the video on social media, the officer in the viral video is attached to the Oshodi police station.