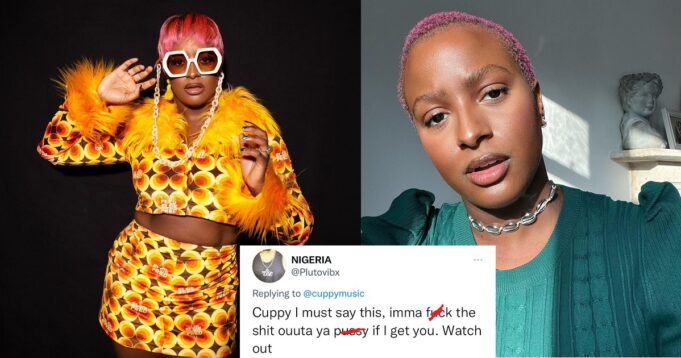 Billionaire heiress and entertainer, Florence Otedola popularly known as DJ Cuppy, has responded to a man who left a sexually perverse comment on her post.

The singer had taken to micro-blogging platform, Twitter, to share a light-hearted post about Insomnia which is a sleeping disorder that makes it difficult for people to sleep.

According to Cuppy, Insomia turns one into a mathematician as you would lie awake at night calculating the number of hours you would get to sleep when you eventually fall asleep.

“Insomnia really does sharpen your mathematics because you spend all night calculating how much sleep you’ll get if ‘fall asleep right now.’ 😂🤣 LMAO 💤”

However, a perverted Twitter user seized the opportunity to tell Cuppy what he would do to her body if he gets the chance to have sex with her.

“Cuppy I must say this, imma fuck the shit ouuta ya pussy if I get you. Watch out”, he commented.

In response, the billionaire’s daughter responded with disdain and disgust at the man’s words.

A while ago, DJ Cuppy was overwhelmed with emotions and cried tears of joy after completing her thesis at Oxford University.

The entertainer who has been giving her fans and followers update about the progress of her thesis, took to her Instagram page on Friday, July 1, to announce that she has finally completed it.