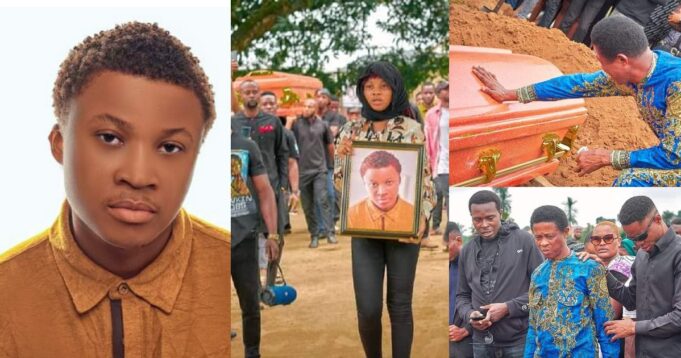 A young man, identified as Ofonime Okokon, has allegedly been poisoned to death by his friends in Uyo, Akwa Ibom State capital.

Ofonime, who was a promising barber and known by the nickname Estro De Barbguy, was said to have been hale and hearty and attended to customers before he allegedly started vomiting blood and passed away shortly on Friday, July 15.

His remains have been laid to rest amid tears in Akwa Ibom state on Saturday, July 16.

Friends of the deceased have now taken to Facebook to mourn his untimely demise.

See photos from his funeral below,

In other news, a 22-year-old female student of Delta State Polytechnic identified as Ozoro, Gift Oloku, has been killed by her boyfriend over iPhone.

The incident is reported to have occurred at Etevie quarters in Ozoro, Isoko North Local Government Area of the state on Saturday, July 16, 2022.

The suspect, a 23-year-old Godspower Adegheji, allegedly hacked the deceased to death with a machete.

Spokesperson of the Sate Police Command, DSP Bright Edafe, who confirmed the incident in a statement on Sunday, stated that the suspect has been arrested.

According to Edafe, the suspect killed the Gift after she mistakenly broke his IPhone while they were fighting.