Home Viral Man denounces Osun as his state of origin after Adeleke won the... 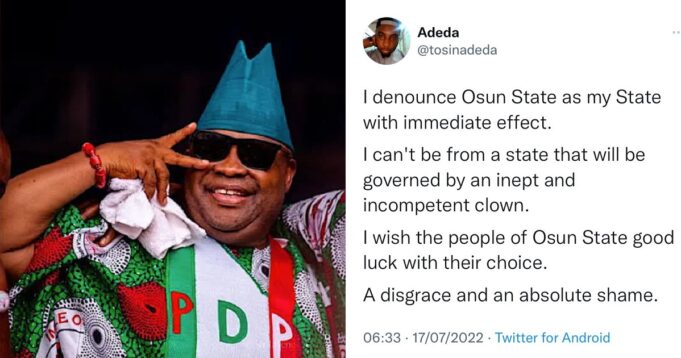 A Canada-based Nigerian man, Tosin Adeda, has denounced Osun as his state of origin after Ademola Adeleke emerged winner of the governorship election held on Saturday, July 16.

Tosin took to Twitter to announce his decision after INEC officially announced Adeleke as the winner of the much-publicized gubernatorial election.

According to him, he can’t be from a state that will be governed by an incompetent clown and joker – referring to the incoming governor.

He added that Osun state is dead to him, as he doesn’t want to be associated with a place that’s ruled by an unserious person.

“I denounce Osun State as my State with immediate effect. I can’t be from a state that will be governed by an inept and incompetent clown. I wish the people of Osun State good luck with their choice. A disgrace and an absolute shame.

Losing a state because of stupid internal politics, everybody wants to play God. Now Osun state is in the hands of a joker. I mean I would feel better if it was a serious individual.

The state is dead to me sha. I would greatly love to be disappointed and proven wrong by Adeleke, one of the times I would love to eat my words, because that will mean progress for the state.”