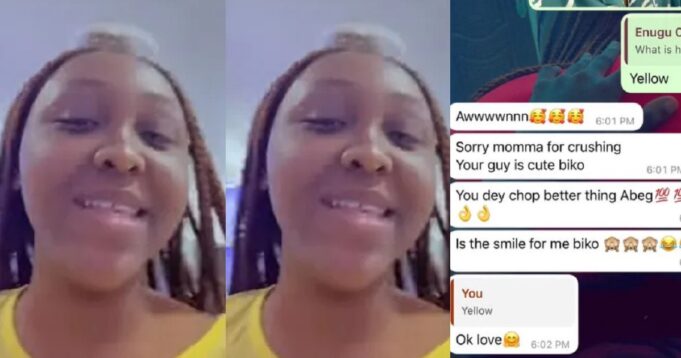 A Nigerian lady has shared her encounter with an Enugu-based cake vendor who started crushing on her man after she sent her his picture to make a surprise birthday cake for him.

The young lady, who’s scared that she might end up losing her man to the cake vendor if she allows her to deliver the cake to their home, aired her concerns online while sharing a screenshot of her chat with the vendor.

The lady said she wanted a birthday cake for her man with his picture on it, so she sent the picture to the vendor, who wouldn’t stop expressing admiration for the man after seeing the picture.

In the chat, the vendor admitted to the young man’s girlfriend, who had reached out to her, that she was crushing on him.

Watch the lady speak below,

In other news, a Facebook user has raised an alarm over a 12-year-old girl who was allegedly married off to a 50-year-old man with over 22 children in Benue state.

According to the Facebook user identified as Lucky Udu, the girl’s family deceived her into thinking she was coming to Benue to school but reportedly married her off as the man’s third wife.

Udu further disclosed that the little girl had opened up to him that her 50-year-old husband allegedly beats her every night and forces himself on her.