The garden city of Port Harcourt came alive on Wednesday as hundreds of Nigerians comprising Port Harcourt residents and others from neighbouring towns of Calabar, Umuahia, Yenagoa, Ubosi and Abuloma converged on Mile 1 market, Diobu, to receive their prizes, in the third prize presentation ceremony of the on-going My Own Don Beta promo packaged by national telecommunication’s company, Globacom.

The Port Harcourt event was a follow –up to the second presentation held last week at Wuse Market, Abuja where another set of Nigerians won different prizes.

The event which was moderated by comedian Godwin Komone, commenced amidst good music provided by the dee jay and was filled with laughter and excitement as the crowd and guests, enjoyed delightful jokes coming from the comedian popularly referred to as ‘Bishop of Osusu Ministry’

Then came the presentation time and the atmosphere changed with the excitement and joyous dance by winners and their relatives as the lucky subscribers receive their prizes one after the other.

A delighted Keke winner, Mrs. Chinedu Okorie, who teaches at Federal Government Girls College, Abuloma, Port Harcourt, said “At the initial stage, I thought it was a scam until when they said I should go to the Head Office. When I got there I saw it was a reality. The Keke is coming at the right time. I will use it for business”

Also, Omang Anthony Oyong, a farmer and a resident of Calabar, who won a grinding machine, said, I will give the machine to my mother who has a shop and it will help to boost her business” 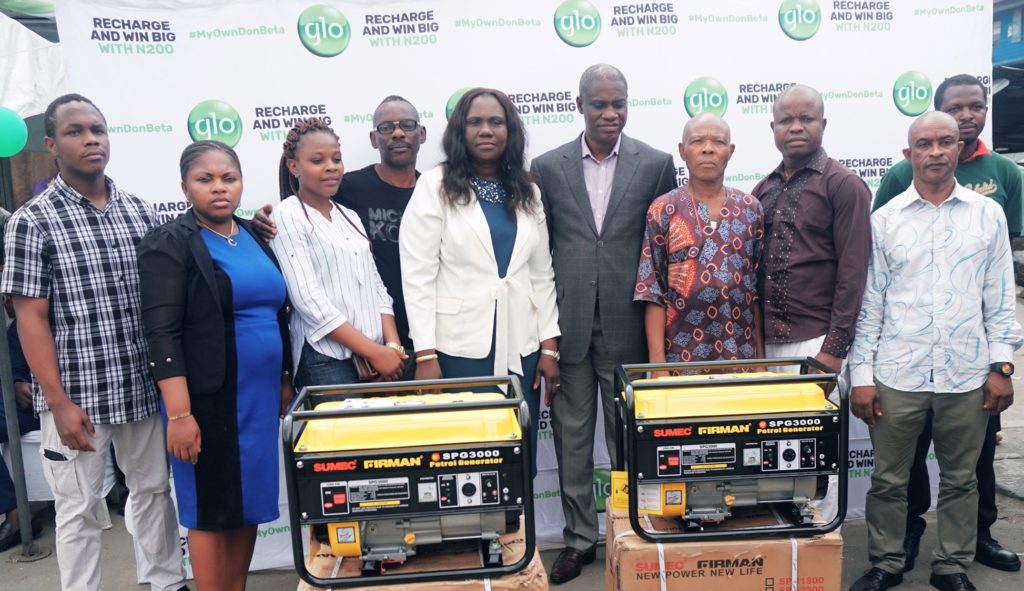 Commenting on the event, Hon Azeru Opara said, “I feel elated. What you people are showcasing today is that you appreciate the fact that people are using your Network and you are giving back to the society. It is a good thing. I want you to do more. I urge Nigerians to patronize their own. Globacom is our own. Nigerians should patronize Glo so that Glo can do more for the people”.

The prize presentation was preceded by the draw for next set of winners. 130 prizes including generators, grinding machines, sewing machines and tricycles will be available for presentation at the next event which comes up next Wednesday at Bodija Market, Ibadan, Oyo State.