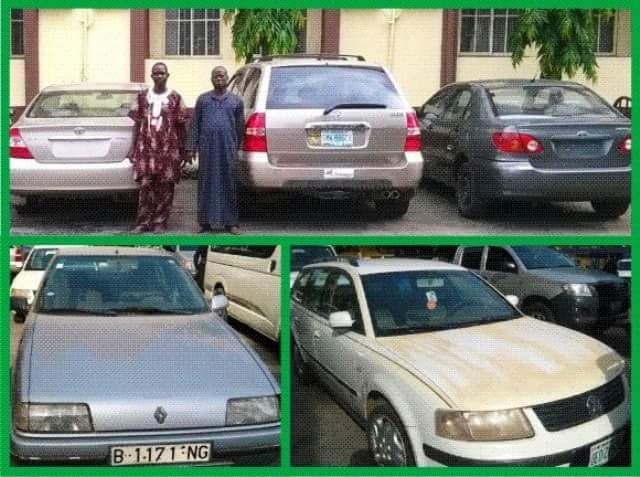 Operatives of the Rapid Response Squad (RRS) of Lagos State Police Command, has reportedly recovered eight stolen vehicles from a member of a syndicate specializing in trans-border crime and stealing vehicles in Lagos and moving them to Ogun and neighbouring countries to sell.

The operatives of the RRS, who were working on a reported case of stolen Toyota Corolla from where it was parked in Ikeja Business District, Lagos, tracked the vehicle on Thursday night to a compound in Kobape, Abeokuta, belonging to a car dealer.

According to the report, It was gathered that the Toyota Corolla, grey, 2004 model with registration number, KRD 759, belonging to Mrs. Olaitan Lawal, was removed from the car park during a church programme at Ikeja, at about 6:00 pm on Thursday before it was found around 1:00 a.m. on Friday.

According to the owner of the car:

“I took my car to the church and I parked it at the space designated for parking. After the church service, I went back to pick my car to go home, but I couldn’t find the car.”

She continued that, “immediately, I called Lagos emergency line on 112 and I reported to the representative. As if that was not enough, I went straight to Area F in Ikeja, to equally lodge the complaint.

” At the station, the Divisional Police Officer (DPO) connected me to the Commander of RRS, Assistant Commissioner of Police, ACP Olatunji Disu, as capable hand to handle the case.

“The DPO also gave me the Commander’s phone number, and, when I called him, he assured me that my car would be found. By this time, it was around 9:00 p.m. at night.”

At home, I couldn’t sleep until around, 12:15 a.m. after midnight when I saw the Commander’s call requesting that I describe my car. I gave him, and he told me that he had found my car in somewhere in Abeokuta. I couldn’t believe my ears. In about six hours interval, my car was found, “, she added.

The RRS’ surveillance team moved to Abeokuta that same night which led to the arrest of two prime suspects who have confessed their connections with the recovered Corolla and seven other stolen cars presently at the RRS headquarters.

The suspects, Samuel Adebeshin, 56, the receiver of the stolen vehicles, who lives at 13 Kobape Road, Abeokuta, and an accomplice, Adeyemi Kamoru, 50, repeatedly maintained that the eight vehicles were all stolen at different locations in Lagos.