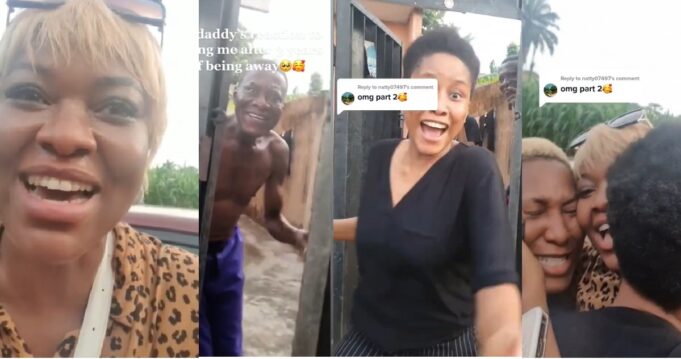 A Nigerian lady identified as Chinyere Berny-Amore has gone viral on social media after she shared a video showing her family’s emotional and adorable reactions as she paid them a suprise visit after being away for three years in the united Kingdom.

Chinyere’s family most definitely did not think they’d be seeing their beloved daughter on that day and the look on the Father’s face when he saw his daughter was pricless.

Meanwhile, we shared a report of jhow A Benue man identified as Chief Aondonengen Ansha gave out his daughter, Anmadam Ella’s hand in marriage to her husband on Saturday, July 9, 2022.

One Jiji Jack on Facebook, took to the platform to share photos of the interesting array of items the father presented to his daughter at the traditional wedding ceremony.

“Take these items to your new home, Aondonengen Ansha to his daughter, Anmadam Ella, as she hooks silver Traditionally today” he wrote. (READ HERE ICYMI)