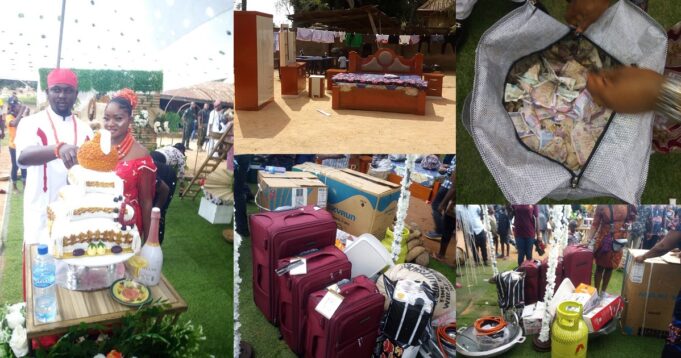 A Benue man, Chief Aondonengen Ansha gave out his daughter, Anmadam Ella’s hand in marriage to her husband on Saturday, July 9, 2022.

One Jiji Jack on Facebook, took to the platform to share photos of the interesting array of items the father presented to his daughter at the traditional wedding ceremony.

“Take these items to your new home, Aondonengen Ansha to his daughter, Anmadam Ella, as she hooks silver Traditionally today” he wrote.

Among the gift items are a bag filled with cash, a bed frame with a mattress in it, wardrobe, standing mirror, refrigerator, gas cylinder and a couple of other items.

See more photos as you scroll,

In other news, popular Talent Manager, Soso Soberekon has taken to his social media page to leave some words of advice to his fellow men.

According to the music executive, men should prioritize taking great care of their Wives because the side-chics won’t be around when they age.

He passed his message by citing the recent appearances Olu Jacobs and his Wife, Joke Silva have made on social media which shows the wife taking care of her husband in his old age.

Men, whatever you do, love and care for your wives….

A good wife is a blessing, especially at the odd hours of your life.