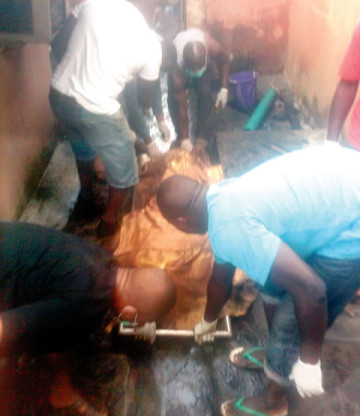 It was a quite tragic evening on Wednesday in the Obele Lawanson Community, Surulere, Lagos, when a family of seven died in a fire disaster.

The victims, who reportedly lived on 23, Michael Ogun Street, died because their co-tenants did not make effort to rescue them when they called out for help around 11.30pm on Tuesday.

PUNCH Metro gathered that the only survivor was six-year-old Chidinma, a relative, who sustained burns injuries to her face and hands.

Nkiru had just given birth to her baby and her mother had visited for the Omugo rites, a popular Igbo culture of a mother nursing her daughter’s baby.

She was said to be preparing to return on Wednesday with the two unnamed ladies she brought with her, when tragedy struck. The landlord of the house was late, while his immediate son lived in the Ijesha area.

The landlord’s grandson, Abdul Jelili, who lives opposite the apartment, said:

“I was sleeping when I heard a noise and quickly rushed out. I saw smoke coming out of their apartment and quickly got a stick, with which I broke their toilet window.
“Smoke billowed out, but I did not hear any movement in the house and could not tell if anybody was in. All the tenants in the other apartments did not come out, so I had to rush out to call for help.”

Another resident, Ejike Okpara, explained that the neighbours did not help because there was animosity among the five tenants in the house.

He said Nkiru had been accused of not greeting the other tenants, among other issues, which had caused series of fight in the neighbourhood.

“So, when the fire began, the neighbours from both sides did not come out. When they finally came out, it was to rescue their families.”

But a tenant, Uzor Alajemba, said he had to first rescue his family when he heard someone raise the alarm. Youths and other members of the community eventually mobilised to the scene to combat the inferno. 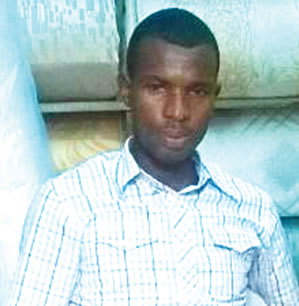 A man, who claimed to be part of the rescue, Chima Dimkpa, explained that the burglar-proof bars made rescue difficult. It was learnt that the grandma had used a candle light to bathe the baby in the night, and forgot to put it off.

After burning out, the fire ignited the table and engulfed the room. The 80-year-old woman was burnt to death. Kelechi, who had also woken up with other members of the family, reportedly called for help.

He was said to have held tightly to the two sisters, while his wife carried their boy in her hand. They were burnt to death together.

“We could have rescued them but for the bars. Everything was smoking hot and untouchable, including the wall.”

A landlord on Ade Close, whose house shared a fence with the apartment, told PUNCH Metro the fire could have escalated, but for the support of his tenants.

The man said he mobilised his tenants to fight the flames from the roof. A security guard, Desmond Mazeli, explained that officials of the Federal Fire Service arrived at the scene around 2am on Wednesday, adding that the lone survivor was taken out through the window.

Mazeli said no one knew the victim was in the toilet, until she coughed and was quickly rescued by the firefighters. He said:

“I used a neighbour’s car to convey her to a private hospital in our area, while somebody called the Lagos State Emergency Ambulance Service.
“At about 3am, the ambulance arrived, together with policemen from the Area C command. She was taken to the Gbagada General Hospital.”

It was observed as some friends and family members of the deceased, who got the news on Wednesday, broke down in tears. Nkiru’s brother, Michael Awuzie, said they had arranged to see the family on Sunday for the child’s christening.

Awuzie wondered why it was only their apartment that was affected, adding that the police needed to investigate. He said:

“Mama went to the market yesterday in preparation to leave for the village today (Wednesday) with the foodstuffs for the Omugo.
“It was to announce to the villagers that her daughter had given birth and she had brought the foodstuffs as a proof of the good news. And now, they have all died.”

The traditional leader of the Surulere area, Kareem Awoyemi, said he could not believe that the neighbours deserted the victims when they called for help.

“I still don’t understand it. Are people not living in this house?”

It was learnt that the deceased’s charred remains had been handed over to the police, who had deposited them in a morgue.