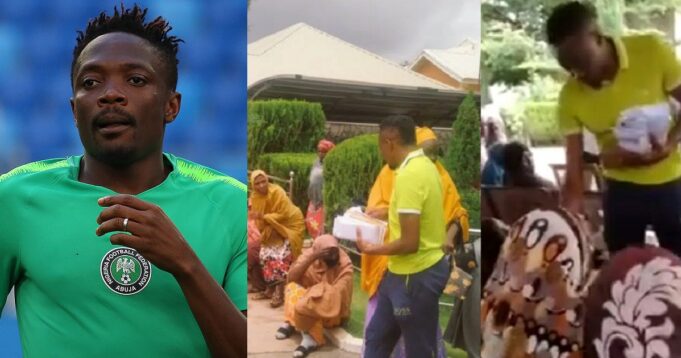 Nigerian professional footballer, Ahmed Musa, has once again been lauded online following his recent benevolent act towards some residents of Jos.

The Plateau State-born Super Eagles forward player was spotted in a video that was shared online handing out N20,000 cash to some locals in his state.

Ahmed Musa is said to have donated N20,000 each to five thousand people to support their businesses. Artisans, including tailors, bean sellers, shoemakers, and a host of other small business owners, benefited from this gesture.

The 29-year-old footballer has a long history of generosity, having contributed in the past and provided scholarships and other sorts of aid to those in need.

A while ago he reportedly gave a street cleaner in Asaba a sum of N250,000.

According to reports, the woman had come around the Super Eagles Camp in Delta State in search of a menial job of N3,000.

It was gathered that after one of their training sessions, Ahmed Musa spotted a 3-year-old boy with his mother and picked him up before taking him into the team bus.

He later beckoned on the boy’s mother and reportedly had an interaction with her before collecting her details.

Moments later, the woman received a text message and screamed which attracted the people around.