Home News “I have forgiven the killers and accepted the will of God” –... 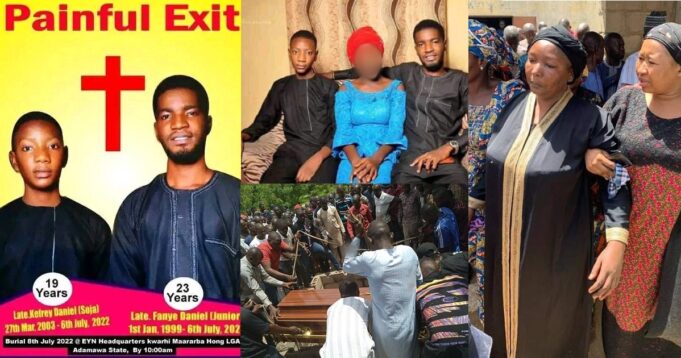 Rev. (Mrs) Daniel Umaru, the wife of the pastor in charge of YN Church, Mubi, Adamawa state, Rev. Daniel Umaru, has said she has forgiven the killers of her two sons and accepted their death as the will of God.

It would be recalled that on Tuesday, July 5, gunmen attacked the residence of the clergyman in Mubi Local Government Area of the state and killed his two sons, Kefrey Daniel (19) and Fanye Daniel (23).

They kidnapped his 13-year-old daughter, Ijagla, and shot the clergyman in the leg and is currently receiving treatment in a hospital.

In a new development, the deceased sons of the clergyman has been laid to rest on Friday, July 8, at EYN Headquarters in Kwarhi Maararba, Hong Local Government Area of the state.

During the burial, Rev. (Mrs) Daniel Umaru said she has forgiven those who killed her sons and abducted her daughter.

“I have forgiven those behind this killings and abduction”. Also, I have accepted the will of God,” she said.

Watch a video of her speaking below,

In other newa, Edwin Kamau, a 23-year-old medical student at Makindu Medical Training College, Kenya, has been arrested by the police after he staged his own kidnapping to get money from his parents. Read here