Home Entertainment News “If you had gone through labour pain, you would know cursing an... 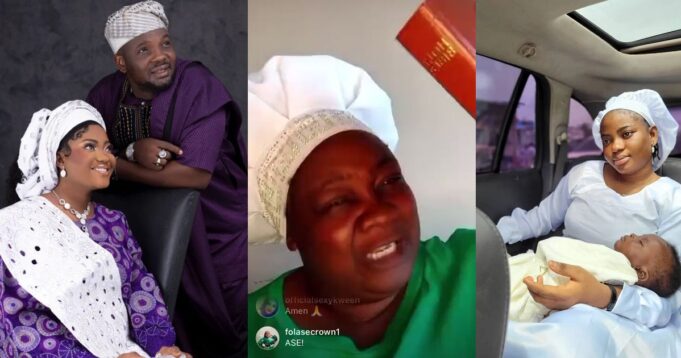 Recall that during an Instagram live session on Thursday, Princess rained curses on actor Yomi Fabiyi and his child following the sentencing of Baba Ijesha, who sexually molested her foster daughter.

However, reacting to the judge’s ruling, Fabiyi, who has taken sides with Baba Ijesha since the beginning of the case, stated that Baba Ijesha must be given the privilege to challenge the court ruling in all possible ways.

This comment apparently triggered Princess, and in an Instagram live session, tearfully rained curses on Fabiyi, his son, Akorede, whom he welcomed with his baby mama, Grace, in February, and his generations to come.

“Yomi Fabiyi, your son whom you called Akorede has not brought any fortune for you. The day you point your hand to your child, you’re pointing your hand to an unfortunate thing,” Princess said in Yoruba, amid tears holding the Holy Bible.

Reacting, Akorode’s mother, Grace, took to her Instagram page to share a picture of herself and her child, prayed for her child, rebuking every curse.

“Heavenly Father, may my child Akorede Imoleayo not fear, for you are with him. As I place my child in your mighty loving hands, give him peace. Akorede, you will excel in life. You are protected in God’s hand, no curse, no evil will befall you. Amen.” The mother of one wrote.

In another post, Grace seemingly mocked Princess for not having a child.

“If you had gone through labour pain, you would know cursing an innocent child/ren is a No.” She wrote.