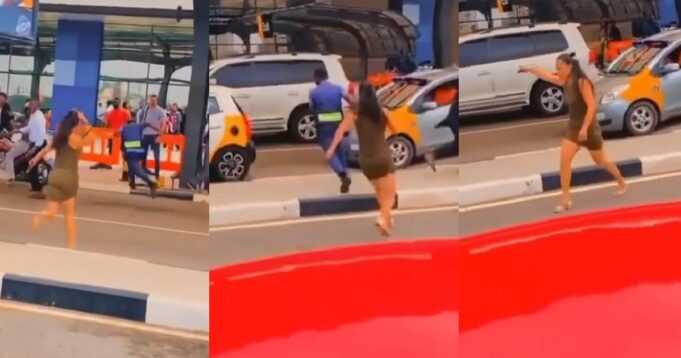 A white woman has been arrested by the Ghana Police Service for attacking an official at the Kotoka International Airport in Ghana.

The lady whose identity was not released, reportedly packed her vehicle in the pedestrian crossing and was told to move her car by the car park attendant but she refused.

When she didn’t budge, the attendant clamped her vehicle which got her angry and she removed the clamp and started pursuing the attendant around the car park before throwing it at him, injuring him in the process.

A video showing the moment the white woman was chasing the attendant on the road and attacked him with the clamp has gone viral on social media.

Confirming the incident, the Ghana Airports Company Limited (GACL) in a statement said the young woman has been arrested and is currently in their custody.

In other news, hundreds of illegal migrants have been captured on camera crossing into the United States through the southern border in Texas.

This reportedly marks one of the largest groups to flood into the U.S. in recent months.

In the video shared on Twitter by Fox News reporter Bill Melugin, hundreds of illegal border crossers were being guided into the water by smugglers at the river in Eagle Pass, Texas, on Wednesday, July 14.