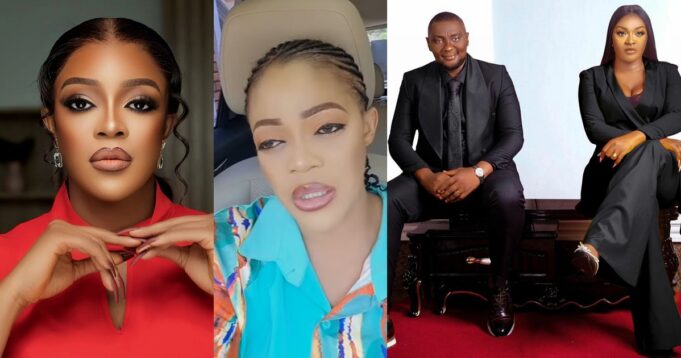 Nollywood actress, Eve Esin has cleared the air on claims that she was once in a romantic relationship with Chacha Eke’s estranged husband and filmmaker, Austin Faani.

This comes after a blogger, Gist Lover, alleged that Chacha Eke snatched the filmmaker from Eve some years back in a bid to rise to the top of her career quickly.

According to Gist Lover, Eve was the one who introduced Chacha to the Nollywood movie scene and gave her the opportunity to become the popular actress she is today, but she repaid her back by getting pregnant for Austin Faani – her alleged lover at the time.

Following the controversial news, social media users trooped to her comment section to hear her side of the story to which she told them to ‘knock and she would open the door for them”. Read here

Eve has now released a statement to debunk the report while noting that she has never had sex with Austin as claimed in the article.

She also stated that she didn’t introduce Chacha to acting and neither did she provide accommodation for the mother of four at the beginning of her career.

According to her, the report is nothing but a lie because she and the celebrity couple who are now separated are friends.

“I apologize to my loved ones who reached out and said I should ignore. Some things are hard to ignore.

If there is a supposed issue as said. Isn’t that sad enough? It’s worrisome that some person is dragging them back and forth. How do both parties heal?

1. I HAVE NEVER HAD ANY CARNAL KNOWLEDGE OF AUSTIN FAANI. CHA AND FAANI ARE MY FRIENDS.

2. I NEVER BROUGHT CHA TO NOLLYWOOD, WE MET ON SET AND BECAME FRIENDS.

3. CHA NEVER LIVED WITH ME IN PHC. A FRIEND VISITS A FRIEND. HOW DID FRIENDSHIP TRANSLATE TO BEING A BOSS?

This post is so you exonerate me from stories that do not concern me. I cannot be involved in what I know nothing about. Let these people heal.

And to those who have nailed me on the cross already, thanks.”