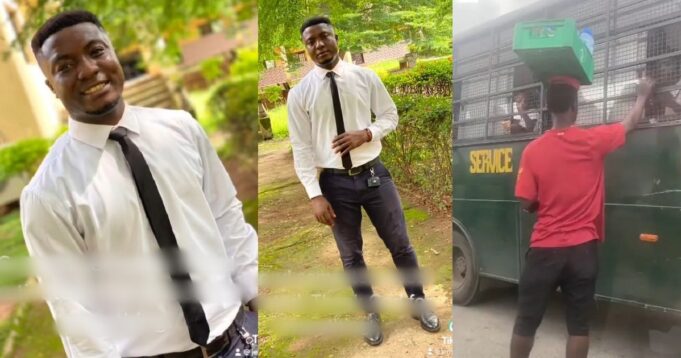 Jeremiah, the traffic hawker who became a viral sensation after giving his earnings to prisoners, has shared a video update of himself.

It would be recalled that in January 2022, the story of the young man changed for the better after he was filmed handing out money to prisoners being transported in a truck along Ajah Axis of Lagos.

When asked why he choose to help the prisoners when he was a struggling hawker, Jeremiah said, “I gave the prisoners money out of pity, Though I am very poor and sell pure water, I still have my Freedom, I can eat whatever I want to eat and go anywhere I want to go, but the prisoners do not have that freedom.” Watch here

His rare act of kindness warmed the hearts of many social media users and he was the topic of discussion for days.

Before long, he was invited by popular billionaire businessman, Obi Cubana, who gave him a fully sponsored scholarship to the Ebonyi State University where he is currently studying Law.

Jeremiah has now taken to his social media page to reveal that he has completed his first semester and about to resume second semester.

Sharing a video collage of himself and his course mate, he wrote,

The video has sparked reactions from netizens who opined that he now looks fatter and fresher.