A Nigerian lady identified as Bola Aseyan who accused UK-based doctor, Dr Olufumilayo of rape, has been remanded in Prison after she escaped to Lagos. 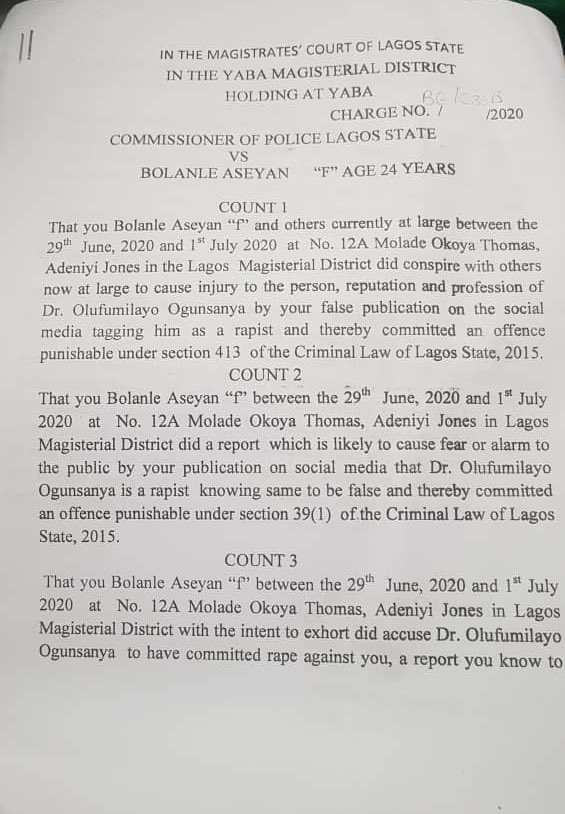 Sometimes around April, the lady called out the medical doctor for allegedly raping her during her visit to his resident in the UK, an allegation the doctor denied and vowed to take legal actions. 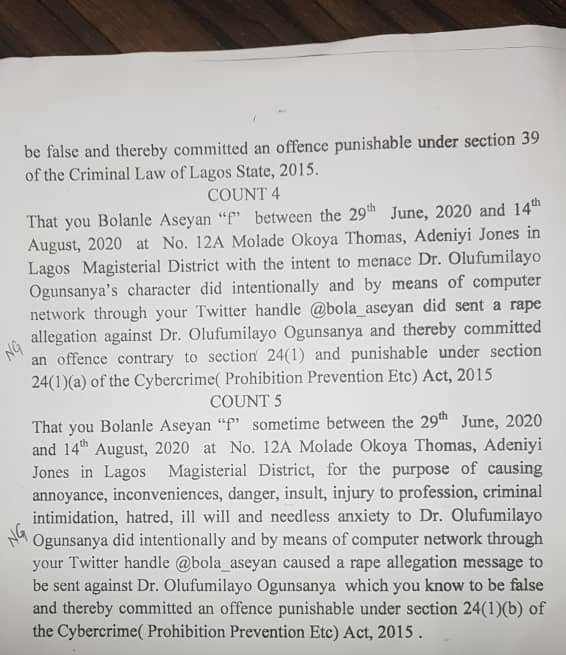 He was eventually vindicated after an investigation by the UK Police, and while the accuser was being requested to report to the Police for further inquiries, she eloped to Nigeria.

The case was escalated in Nigeria and she has been reportedly arrested and arraigned by the Police. It was learnt that she has been remanded in a Prison in Lagos today. 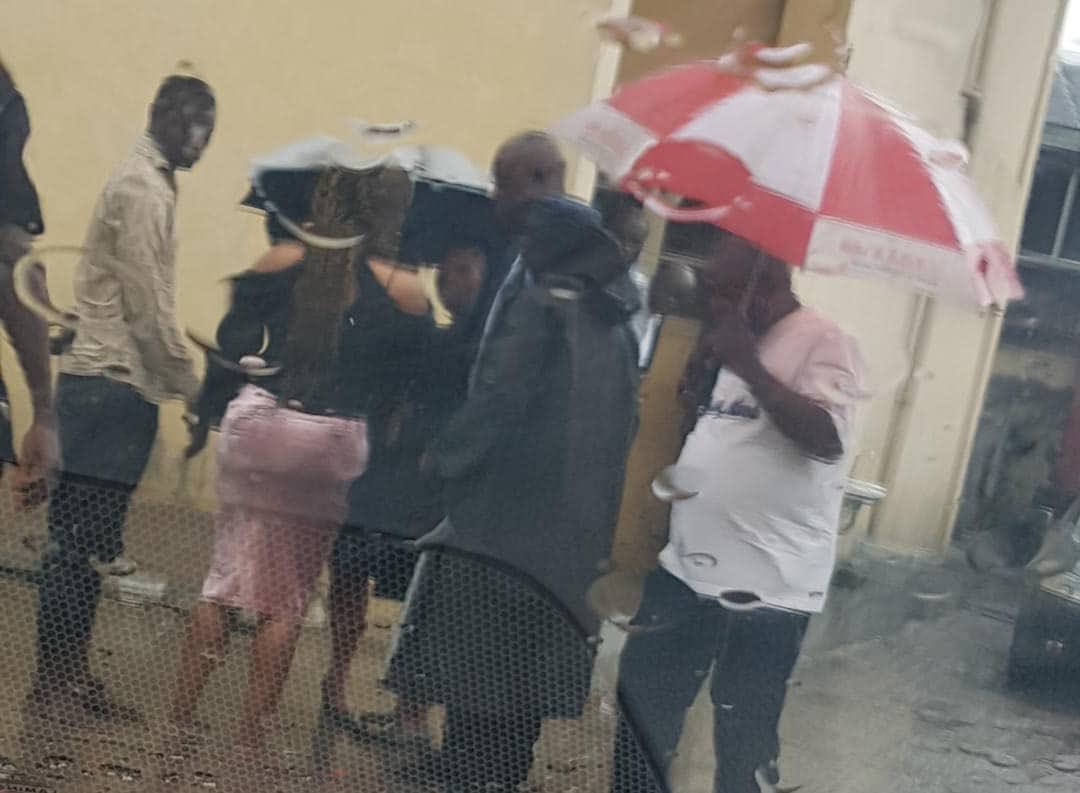 A Lagos lawyer @segalink shared the comprehensive report on Twitter. 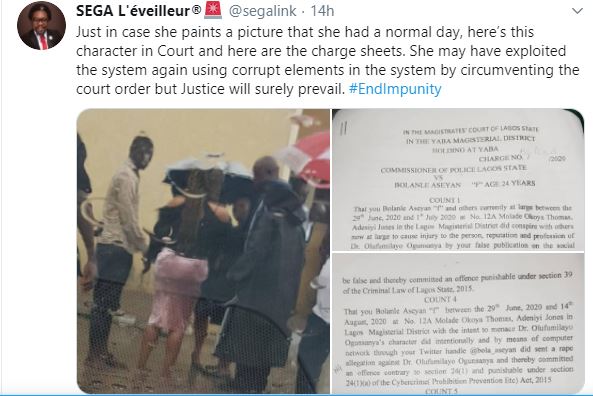 “There is a trend on Twitter that is ruinous. Idle souls seeking a vicarious adventure through the life of another sit back and play Judge rather than observe. After all, intelligence demands doubting, questioning & not being impressionable or biased when cases arise. #PlotTwist Image

“Evidence & patterns show vividly that everyone is still healing from things they rarely speak about but if keen attention is paid to their actions you can’t but see the projection of personal failings. Let me walk you through a popular allegation that once shook the Twitterspace.

“A certain Bola Aseyan, who barely got out of medical school with tons of misdemeanors & other public disturbance allegations, and recently took a trip to the UK just to record another, in the bid to incriminate a popular Dr Olufunmilayo as evidence clearly shows.

“Twitter was engulfed by her false rape allegation and premeditated attempt to assassinate the character of a young UK based Doctor whose major crime was his naivety & kindness. Audio evidence of a phone conversation between the aggressor & her trusted friend reveals that she deliberately plotted everything from Nigeria with the enumeration of her objectives with a checklist which included but not limited to; the procurement of seductive clothes & the narration of her seductive intent as gathered. It was a gory script too unsettling to repeat.

“Upon achieving her aim to have an intercourse on foreign soil with her target, she probably missed some plots that may fit into her planned incrimination & she did all that she could to try again, leading to another consensual sexual episode which she’s failed to mention.

“Again, these sexual episodes were missing vital ingredients for her plot and she got desperate. Records show her conversation with her trusted ally on the entire incidents especially how she actively/desperately seduced Dr Olufunmilayo to the point where he had to run for safety.

“In her account to this ally, who voluntarily presented his statement to the investigation in Lagos, she deemed Dr Olufunmilayo uncooperative and possible gay for avoiding her entreaties & seductive approaches. Another witness physically present in such occasion corroborated this.

“I want to believe it was at this point that she felt frustrated and decided to weaponize all that transpired as premeditated. She deployed any and every trivial matter to suit the narrative of her plot and proceeded on a diabolical journey to ruin the career & life of her target.

“As backed by a few drama queens on Twitter, she went to the UK Police & GMC to lodge a complaint painting a grotesque picture of violent sexual assault. Unfortunately for her & those rooting for her, UK Police are not as gullible. They investigated & cleared Dr Olufunmilayo.

“She had expected that the Police would make an arrest based on her falsehood & that they GMC will seize the license of Dr Olufunmilayo but none of her evil intentions came to pass. The GMC carried out their investigation in collaboration with the police & sat twice.

“Like any ethical professional organization, they had to do something. When they received the police report on the matter that there is no criminal offense on the allegation brought forward as they have discontinued the chronomicide (bloody waste of time)…

“The GMC also felt this has nothing to do with professional misconduct but decides to still follow up on the allegation till the lady retraces her steps. But as the investigation later found, Dr Funmi filed a suit against her and she sneaked out of the UK to Nigeria.

“Suffice to say that she evaded justice in the Uk & crept out like a fugitive. Court papers, UK police emails and all evidences to back up the above are before @SIAF_NG. Upon, the alert that she eloped from the UK, reports were filed in Lagos with the Police.

“All attempts of the @PoliceNG to invite her over was rebuffed as she kept giving excuses even after official invitation were extended to her. She eventually showed up with her lawyer at the Bar Beach Police Station where all the evidences were presented to her.

“To any sane individual, this would have been a turning point where all demonic acts could have been tamed for peace to resign but she called the bluff of the police authorities and insulted them even against the advice of her counsel. The Police had no choice than to escalate.

“The case was bumped to State Criminal Investigation in Panti, and she continued to twist the system and play in the intelligence of the Police until they had to detain her for her unruly behavior despite the glaring evidences. She was later granted bail & given directives…

“None of the conditions given to her at Panti were met. She kept on throwing tantrums and making attempts to incriminate the investigation officers amidst attempts to twist the system with a few corrupt souls within. She stopped reporting at Panti after lying against the IPO…

“She accused the IPO of damaging her phone as an excuse to stall the investigation. She absconded and deployed a rogue team at Zone 2 to obstruct justice in the attempt to move the investigation there. Unfortunately for her the AIG at Zone 2 is just & Professional.

“This was an AIG that was formerly a CP at Ogun State I own for his attention to details. @SIAF_NG has huge records of several successful investigations void of human rights abuses including murder cases solved by this individual. But I digress…

“When she realize she has failed on all grounds and may likely be declared wanted publicly. She made herself available yesterday night and was apprehended and charged to court this morning. She has since been remanded in the Prison custody of Panti until bail conditions are met.

“She will undergo COVID19 test before being taken to prison if she fails to meet her bail conditions. This however is just the State Vs Bola Aseyan in a criminal investigation and I believe a civil suit may follow concurrently given that she is a flight risk & criminal minded.

“One thing is certain though in all this. It will be difficult for anyone to jump in front of any allegation forthwith without due diligence. I pray this doesn’t discourage others with genuine claims. We need to protect our men as much as we do the vulnerable women out there.

“Let Justice take its course. As far as she’s concerned now she is trying hard to create an impression that Twitter is boring to justify her disappearance. Know that she has been canned. She is being processed now to be remanded in prison. Learn from this. #JailedAsOught.