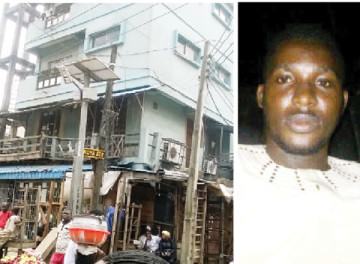 That Lagos landlord, Sola Solomon, who allegedly set his tenant ablaze in the Idumota area of the state, has been reported dead.

From a police source on Wednesday, it was gathered that the suspect died from the burns injuries he sustained while setting fire to the tenant, Abeeb Daraloye.

It had been reported two days ago that Abeeb and his landlord had a disagreement over the use of the compound toilet. Later in the day, 67 year old Solomon reportedly poured petrol on Abeeb and ignited a fire with a lighter.

While on fire, the suspect was alleged to have pushed the victim from the top floor of the three-storey building, killing him in the process.

READ ALSO: Landlord Kills Tenant By Setting Him On Fire In Lagos. (Photo)

A police source said on Wednesday that the suspect died at the hospital.

“The landlord is also dead. He died at the hospital in the afternoon. So as it is, the case has been resolved.”

Residents on Iga Idunganran Street, Idumota, where the incident happened equally confirmed the death to PUNCH.

“Yes, the man has finally died. He did not survive the injuries. His family members are around. Abeeb’s corpse is also at the Lagos Island General Hospital mortuary, and we don’t know why the police have yet to release it for burial,” a tenant, who asked not to be named said.

She urged the government to come to the aid of Abeeb’s widow and her child. Abeeb’s widow, Tope, who spoke with the publication on the telephone, appealed for help, saying her husband’s death was a big blow to the family.

She explained that her husband was planning to travel overseas, and had promised to take her along with their child when he was killed.
Recalling the Monday incident, she said:

“My husband had washed the toilet in the morning, when Baba (landlord) went to soil the place. My husband told him that it was not right for him to soil the toilet.
“Baba became angry and slapped my husband before carrying a plank which he smashed on his head. He said my husband had no right to talk to him that way since he (landlord) was the owner of the house.
“In the night, my husband had finished taking his bath and was cuddling our baby in the room when Baba knocked on our door. I told my husband not to answer the call, but he said there was no problem. He thought the man had come to reconcile with him.
“That was how Baba poured fuel on his face and lighted him up. As my husband held him, Baba pushed him down the two-storey house. The whole passage was also on fire before it was put out.” Her mother, Sidikatu Lawal, said the only justice the family desired was care for Tope and her child.
“They got married just one year ago and their baby is still very young. The only justice that can be done now is the care for both mother and child,” she said