A Nigerian mixologist who witnessed moment corpses of Coronavirus patients were loaded into a van at the Infectious Disease Hospital in Yaba, has spoken up against relaxation of the lockdown in Lagos.

The man who took a sick friend to the hospital for treatment, said he has seen 7 people die in a space of 14 hours. @AmeenJimoh described relaxation of the lockdown as the worst idea anyone could conceive as the daily cases is now more than the capacity of the isolation centers in Lagos state. 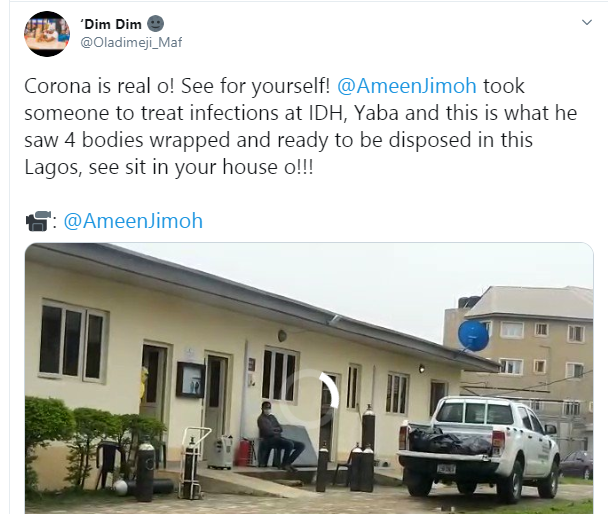 He also recalled how a young man who only had his boxers on, died on the floor of the Lagos Island general hospital because “hospitals are stressed”.

Stay at home or be extremely cautious.

I have seen 7 people die in a space of 14 hours. A man died in his car, another was brought in the afternoon, died at night. It’s no fuvking joke. Relaxing this lockdown is the worst idea anyone could conceive. The daily cases occurring is more than the capacity of the isolation centres in Lagos combined.

Secondly the daily cases aren’t daily per se ad the results don’t often come out immediately, there’s a lag. Health care officials are doing the most. The hospitals are stressed, this is the worst time to fall ill or catch a serious flu, you’d be turned away, and serve around till you probably die.

This was the case in Lagos Island general hospital. A young man died on the bare floor with just boxers on, the only treatment he was given was “FANTA”. The hospitals are stressed. We are on our own. Stay safe! 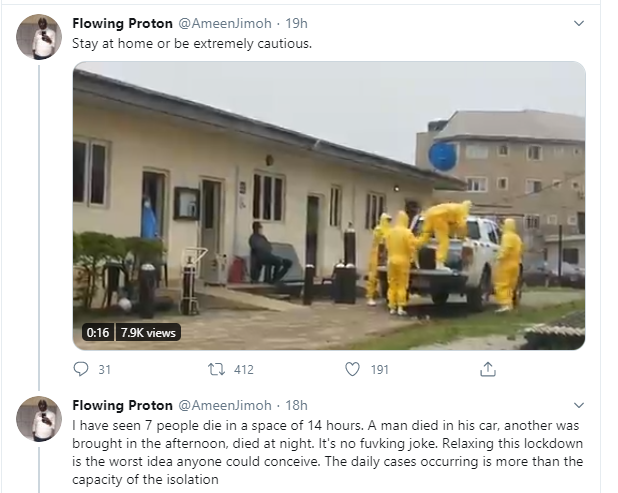 Corona is real o! See for yourself! @AmeenJimoh took someone to treat infections at IDH, Yaba and this is what he saw 4 bodies wrapped and ready to be disposed in this Lagos, see sit in your house o!!!