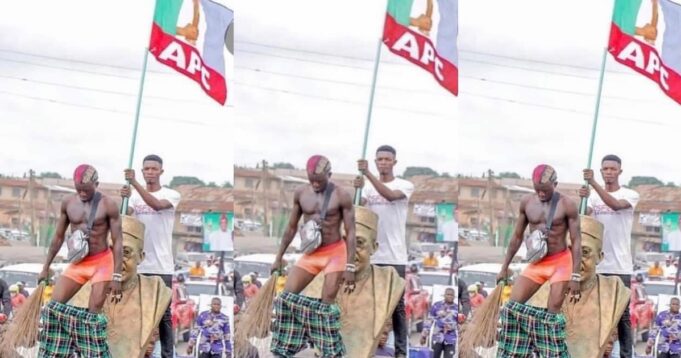 Massive reactions have trailed a photo of Portable stripped to his boxers in front of the statue of Obafemi Awolowo in Osogbo, as he campaigned for the All Progressives Congress (APC).

The controversial singer, who was at the APC mega rally for the re-election of Osun State Governor, Adegboyega Oyetola, held in Osogbo, danced vigorously and, at some point, stripped to his boxers and bent as if to sit on Obafemi Awolowo’s statue.

The photo has sparked outrage from Nigerians since it found its way to the internet. Many social media users averred that Portable’s conduct in front of Awolowo’s statue was disrespectful to the legacy of the statesman.

Meanwhile, recall that Portable earlier revealed that he was paid to support the ruling party. In light of this, some tweeps joked that the singer had to be extra to give APC value for their money.

Reacting, a Twitter user wrote, “I’m not even Yoruba & I’m deeply offended by that crass display of disrespect and disregard for such a highly regarded Yoruba leader. Just look at this rubbish.”

Portable off pant in front of Chief Obafemi Awolowo while campaigning for APC in Osun State.
He attempted to sit on the statue of the late Premier of the Western region.
Who will actually call on this guy to orientate him?#Portable Habeeb Okiola is not okay. pic.twitter.com/dJiPP8gELR

I'm not even Yoruba & I'm deeply offended by that crass display of disrespect and disregard for such a highly regarded Yoruba leader.

Just look at this rubbish. pic.twitter.com/2HvaRb04qb

Ordinarily that picture of Portable with his butt in the face of Awolowo's statue and someone carrying the APC flag behind him should be enough to make Oyetola lose the Osun elections on Saturday.

But these are not ordinary times.

The way APC has ridiculed the Awolowo name, brand, legacy, and style of leadership is not enough they had to move a step with the desecration of his statue. Portable say make Awo see madness. Voting for Apc is tantamount to madness, tuition hike,
hunger #osogbo #imole #Nigeria pic.twitter.com/KqnukZda9E