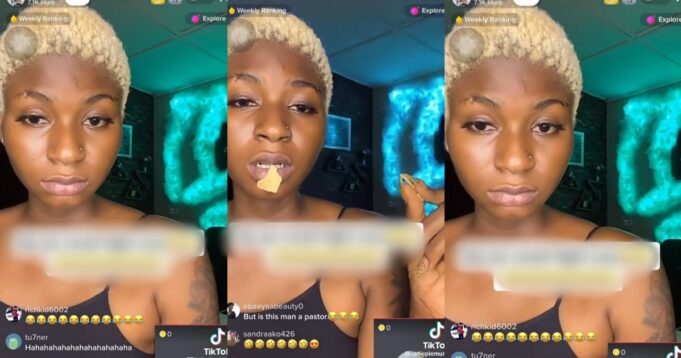 A Pastor recently confronted a young lady for eating ‘seductively’ while live on video-sharing platform, TikTok, and accused her of deceiving men.

A video trending online captures the hilarious moment the pastor tackled the lady and told her to stop coming online to eat because she’s tempting men.

He accused her of having a evil mind for going live on TikTok to eat because it’s not normal and told her to eat whatever she wants to eat beforehand.

However, the lady who had over 600 people viewing the live session, appeared pissed by the pastor’s comment and told him her viewers love watching her live videos.

She further told him to go live on his own TikTok page instead of watching hers.

In other news, A video circulating online shows the moment two young women dating internet fraudsters better known as Yahoo Boys, were jubilating after their boyfriends received funds from their ‘clients’.

In the trending video, one of the ladies who was overtly excited, revealed that they did sacrifice for their boyfriends to be successful and in less than 24 hours, they cashed out $6,000 (N2.5m). Watch here