Men of the Anambra State Police Command have arrested a 29 year old man identified as Chizoba Nwoye for killing a tricycle rider, Dumebi Oforkansi, burying his remains in a shallow grave and stealing his tricycle.

A statement released by the police command says on October 2nd, the police received a report that Dumebi, aged 25, from Ubarunisionye village, Nando in Anambra East LGA, was kidnapped by unknown persons and taken away along with his tricycle (Keke) while operating it for commercial purpose. 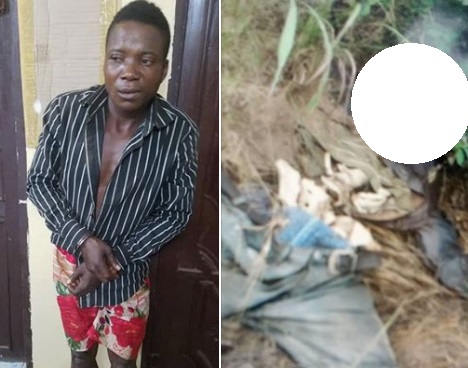 Following the report, Police operatives attached to the Command State intelligence Bureau (SIB) swung into action. Its investigation led to the arrest of Chizoba who confessed that himself and one Ezennia Nweke alias Abada, allegedly conspired and killed the victim, buried the corpse inside the bush along Achalla-agu Nando road and made away with his keke.

He thereafter, led a team of Police detectives to the scene where the victim was buried in a shallow grave and his decomposing body was exhumed, certified by a medical doctor in the presence of the deceased’s parents who equally identified the clothes he wore. Thereafter, the body was photographed and released to the deceased’s father for proper burial.