Home Entertainment News “Show me a video or a written note of me denying the... 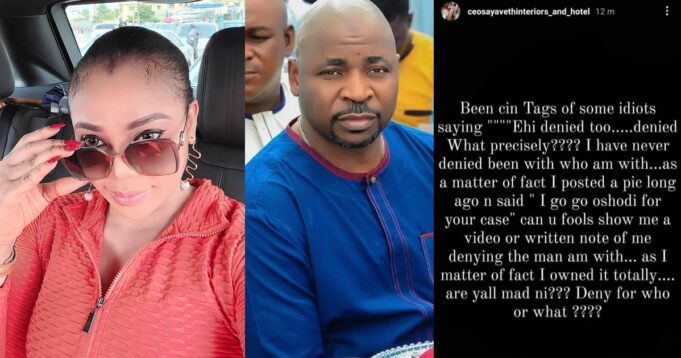 MC Oluomo’s lover and hotelier, Ehi Ogbebor, has asked her critics to provide proof of her denying her relationship with the NURTW chieftain.

The businesswoman was under fresh fire on social media after video of popular Nollywood actress, Destiny Etiko denying allegations that oil magnate, Jack Rich bought her a car went viral. Destiny also stated that she has never met the man in question.

Following the actress viral video convincingly stating that she has never met Jack, who many tagged her boyfriend, netizens dragged Ehi all over again as they claimed she initially denied her lover, MC Olumo before eventually owning up to dating him.

Another critic wrote, “Ehi do pass this one, finally she don come straight and has become one of MC’s numerous wives”.

However, the comments caught Ehi’s attention and she has now reacted. Taking to her Instagram story Ehi asked anyone with proof to provide where she ever denied MC Oluomo.