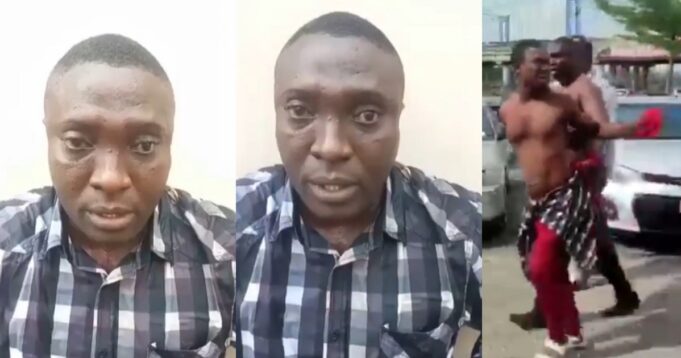 A video showing the moment two men were paraded for stealing a Toyota Corrola at the Shoprite in Warri, Delta state, has been shared online.

The men were reportedly nabbed after stealing the vehicle of a shopper and were paraded round the mall while being asked to chant what they stole.

They were stripped of their shirts and beaten as they walked round the mall confessing the crime to all and sundry.

One of the culprits who spoke on camera also confessed to selling the car to a man in Benin City for the meagre sum of N300k.

In other news, officers of the Enugu State Police Command have shot a motorist, Christian Ogwuike, after he allegedly crushed a policeman at a checkpoint.

Reports have it that Ogwuike was with his fiancée in a Lexus SUV on Thursday, July 21, 2022, when they met some policemen at the Monkey Roundabout close to the Zonal Office of the Economic Financial Crimes Commission.

According to a source, who claims to have been an eyewitness, told Punch the police shot the motorist because he refused to give them bribe.