Health officials have gotten a breakthrough in the cure for the deadly Ebola disease following results from a clinical trial of two therapies made from Ebola antibodies.

IN the Democratic Republic of Congo where there is a major outbreak of the virus, four Ebola drugs was administered to patients and two showed that 90% of infected people can survive if treated early.

The therapies that have improved survival rates are REGN-EB3, a cocktail of three monoclonal Ebola antibodies made by Regeneron Pharmaceuticals (REGN), and mAb114, a single monoclonal antibody developed by the National Institute of Allergy and Infectious Diseases, part of the National Institutes of Health. Patients who were receiving two other drugs that are being discontinued, Zmapp and remdesivir, will now have the option at the discretion of their treating physician to receive the treatments that have been shown to work. 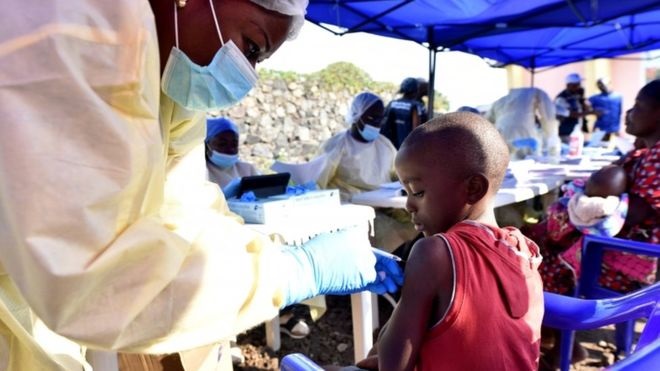 “REGN-EB3 and mAb114 are the first drugs that, in a scientifically sound study, have clearly shown a significant diminution in mortality for people with Ebola virus disease,” Anthony Fauci, director of the NIH’s National Institute of Allergy and Infectious Diseases, told AFP.

“It means that we do have now what looks like treatments for a disease which not too long ago we really had no therapeutic approach at all,” said Dr. Anthony Fauci, director of NIAID.

“We feel that with agents such as these … that we may be able to improve the survival of people with Ebola and … might even make people more enthusiastic about coming for care.

“Because when you have something to offer an individual, it makes it much more likely that you might get to them early. And the earlier the better, as in any disease” he added.

The trial was conducted by an international research group co-ordinated by the World Health Organization (WHO) and it began in November last year. The four experimental drugs were tested on 700 patients, with results from the first 499 now known.

Of the patients given the two more effective drugs, 29% on REGN-EB3 and 34% on mAb114 died, NIAID said. In contrast, 49% on ZMapp and 53% on Remdesivir died in the study, the agency said. The survival rate among patients with low levels of the virus in their blood was as high as 94% when they were given REGN-EB3, and 89% when on mAb114, the agency said.

The findings mean health authorities can “stress to people that more than 90% of people survive” if they are treated early, said Sabue Mulangu, an infectious-disease researcher who worked on the trial.

With the breakthrough in the trial, it means Ebola may soon be a “preventable and treatable” disease.