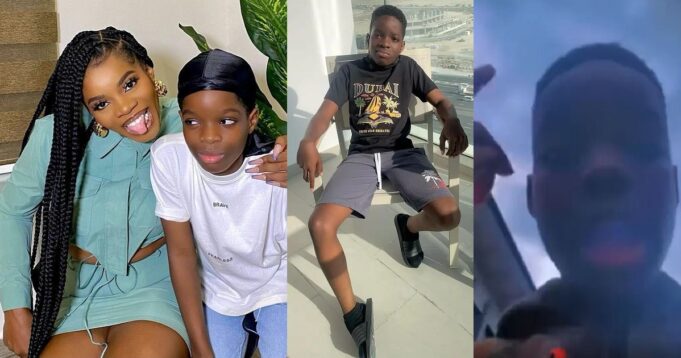 Sola Ogudu, the first baby mama of superstar singer Wizkid, has taken to social media to react after her son, Boluwatife, told her he left his class group.

The 11-year-old had opened up to his mother that he had left his class group because of the negative energy.

In a video making the rounds online, Bolu is also seen complaining about the bad vibes from his peers on the class group page.

“I am not really in the mood to argue, if you want to go on – I mean you can because like I said there is power outage so whatever. I am leaving the group because too much bad vibes in it and am out”. He said in part.

Reacting to her son’s outburst, via her Instagram story, the mother of one noted that her son has zero tolerance for stress.

“Tife and his Zero tolerance to stress! Yesterday He told me he left the zoom class group cos he couldn’t deal.. but I didn’t quite get it until this morning I found the video in the next slide whilst I was doing my usual phone check to be sure we are on par u get me? Lol And yo I cracked up so bad after watching!!! @official tifebalo un why so angry?” She wrote.

See her posts video below,