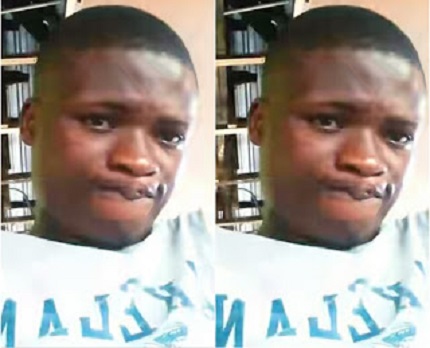 A 22-year-old fashion designer slumped and died on Sunday on Orobiyi Street, in Alagbado area of Lagos State.

According to Punch Metro, Community youths were said to have attacked one Taofeek Sodiq, who had a disagreement with the victim earlier that day.

The youths were about lynching the suspect when policemen from the Alagbado division rescued him.

Punch Metro gathered that the suspect had sent his son on an errand with N500. The 10-year-old was said to have been defrauded by a man who sat in the front of Shotunde’s locked shop.

The boy’s father reportedly accused Shotunde of colluding with the fraudster, insisting on getting back the N500. Sodiq, in the heat of argument, allegedly told the deceased, “You will not live to open your shop tomorrow, if my money is not returned.”

A resident, Owolabi Daod, explained that within three hours, the victim slumped and died.

He said, “Around 10am on Sunday, a man sat in the front of Lukmon’s shop. Another man, who lives in the community, sent his 10-year-old son on an errand with N500.

“But the man in the front of Lukmon’s shop called the boy and asked him to bring the N500 that he would double it for him. The boy foolishly gave him the money and the man absconded.

“A resident, who saw the boy sitting in front of the shop, asked him what he was waiting for. It was at that point the boy knew he had been scammed.” Daod said the boy’s father, upon learning the news, confronted Shotunde and accused him of colluding with the fraudster.

The 22-year-old, who denied the allegation, reportedly asked for a description of the fraudster. He was said to have called one of his friends who fitted the boy’s description; but the boy said he was not the one.

The boy’s father reportedly resorted to threats, insisting that he must recover the money.

“The man came out with a friend and said if he didn’t get his money back, Lukmon will not live to open his shop the next day. We thought it was all over.

“Lukmon was walking back to his shop when he suddenly collapsed. We rushed him to a private hospital where he was confirmed dead,” Daod added.

Punch Metro gathered that residents trooped to the suspect’s house and dragged him out. They were said to have beaten him and were about lynching him when the matter was reported at the police station.

“The police prevented jungle justice on Sunday. A police team had to stay in the community for more than six hours,” a source said. It was learnt that the victim’s father fought off efforts by the police to recover his corpse.

One of Shotunde’s friends, Ayeni Tosin, said he was buried at his father’s residence in Ijoko, Sango, around 11pm on Sunday, Tosin who described his friend as easy-going and gentle, said he was not sick prior to the incident.

She said, “The victim’s father reported that the suspect threatened his son that he would not live to open his shop the next day. After three hours, the deceased slumped and died.

“A joint team of patrol vehicles moved to the scene to remove the body to suppress further tension, but the victim’s father resisted the action of the police on the ground that he wanted to bury his son according to Islamic rites. Investigation is ongoing.”