Home Viral Abducted Greenfield student reunites with his family after being released by bandits...

One of the abducted Greenfield University student, Aaron Attahiru, has reunited with his family after being released by bandits.

Mother of the released student, Lauretta confirmed her son was released by the adductors on Tuesday, May 4th, but refused to disclose how he was released.

A video that has been serving rounds online since Aaron’s release, captured the moment the young man reunited with his family. In the video Lauretta is seen kneeling on the floor as she hugged her son repeatedly.

Meanwhile viral reports alleged that Aaron was released after his parents negotiated and paid the bandits ransom.

This is coming after the abductors of the students on Monday threatened to kill the victims if the government refuses to pay them N100 million ransom.

Watch the moment Aaron reunited with his family below, 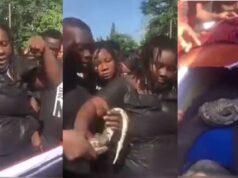