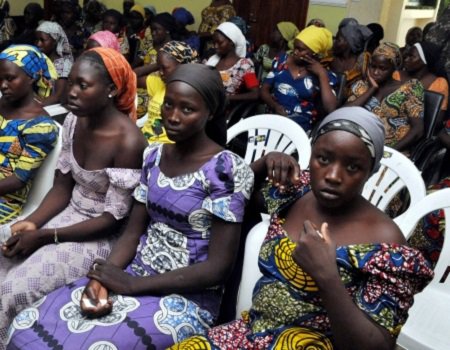 THE photographs of newly freed 82 Chibok schoolgirls have been snapped and given to their community leaders to pass on to parents for the purpose of identifying their children, the Tribune Online has learnt.

It was gathered that Presidency took the decision to adopt this option of photographing them in order to avoid the chaotic experience that followed the release of 21 of the school girls in October last year where several parents claimed individual girls as their own because of
similarity in their names.

The Tribune Online learnt that photographers were brought into where the girls were being quartered to have their pictures taken which are now being distributed to Chibok community leaders who have started coming to see them in Abuja from Sunday. The community leaders have been instructed to take the pictures back to Chibok and environs where they girls come from to enable their families and communities to identify them before coming to Abuja to claim them.

The Presidency also believes that now that the names of the girls have been published, some parents may be able to provide incontrovertible evidence that they are related to some of them girls even before they receive their photographs.

Senior Special Assistant to the president on media and publicity, Garba Shehu, confirmed this to the Tribune Online in Abuja on Monday, noting that most of the girls are not from Chibok town itself, but villages scattered around the area. He said the government is doing its best for the girls who he noted would be identified by their parents as they come to Abuja.

On the condition of the girls who were abducted from their school dormitory in April 2014, the presidential spokesman observed that they were brought in great shape with no visible sign of their abuse by the insurgents. He said their case is unlike the 21 Chibok girls freed last October who came in poor shape.

Garba said: “To be honest, without appearing to speak for Boko Haram, from the outlook of these girls, they appear better in terms of their physical outlook than the 21 we received before.

“Those 21, you know the way they came, they looked famished, underfed and undernourished.
“This is not to take away from the fact that these ones too have been traumatised. “However, was there abuse physically, sexual and all of that? Only medical examination which is now on going, will reveal that.

“But on the face of it, they don’t seem to have…there is nothing so far on their faces to show that abuse if there was any. “But detailed examination psychologists, physiologist will examine them and then they will tell us far or how much of abuse has taken place.”

President Muhammadu Buhari received the girls on Sunday night, expressing delight over their release which he described as a pleasant second anniversary gift to the people of Nigeria.

Speaking while hosting them at his official residence at the Presidential Villa, Abuja, he said: “I cannot express in a few words how happy I am to welcome our dear girls back to freedom. “On behalf of all Nigerians, I will like to share my joy with you, your parents, your relatives, friends and government of Borno State on regaining your freedom.

“The Federal Government will like to commend the security agencies, the Red Cross, local authorities, local and foreign NGOs and all those who contributed in one way or another to secure the release of our Chibok Girls.”