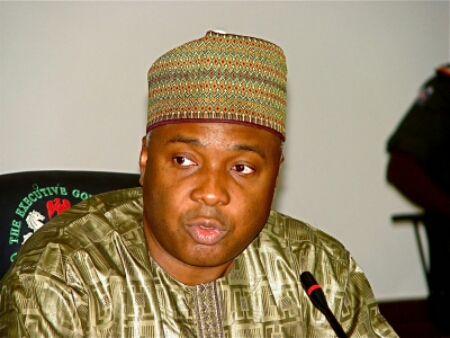 In line with reports of the warrant of arrest issued against Senate President Bukola Saraki, he has replied the motive by the officials with a statement.

Following the development in the Code of Conduct Tribunal (CCT) today, Friday, September 18, 2015 when the Tribunal chose to ignore the subsisting order of a Federal High Court by sitting, we hereby state our position as follows:

1. While the Senate President, Dr. Abubakar Bukola Saraki, had stated and maintains that he is ready to submit himself to due process of the law on any issue concerning him, he also believes he has an inalienable right to resort to the same judiciary for protection when he feels his fundamental rights are about to be infringed upon.
2. It is for this reason that Dr. Saraki, having satisfied himself that the case filed by the CCB and the manner in which the case was filed show that he will not be given justice, resorted to the Federal High Court for the determination of the issues of competence of the prosecutor as well as compliance with the procedure stipulated in the Code of Conduct Bureau and Tribunal Act.

3. The Federal High Court on Thursday, September 17, 2015, therefore ordered that the all parties in the case should appear before it on Monday, September 21, 2015. The implication of this ruling by a Court of competent jurisdiction is that the sitting today has been overtaken by event. It is for this reason that Dr. Saraki chose to go about with his normal official schedule.

5. We are however dismayed that the Tribunal chose to disregard the order of the Federal High Court and the motion to suspend hearing till Monday when all parties are expected to argue their positions on the constitutional matter.

6. It is also a surprise to us that despite the application by the lead counsel to the Senate President that he will produce Dr. Saraki on Monday and the personality of the person involved as the Number three man in the country, the Tribunal insisted on issuing a warrant of arrest as if its intention is simply to embarrass Dr. Saraki. We are not unmindful of the fact that the Tribunal is acting under political influence and external pressure. This is dangerous to our democracy.

7. The conduct of the Tribunal today left nobody in doubt that it cannot do justice on the matter before it. It is also clear that today’s decision is an abuse of the rule of law which portends danger to our judicial system. The Tribunal has equally set a bad precedent in the way and manner it conducted itself during the proceedings.

8. We want to emphasise the fact that this is not part of any war against corruption but using state institutions to fight political opponents and seeking to achieve through the back door what some people cannot get through democratic process.

9. We need to caution here that in a desperate bid to settle political scores and nail imaginary enemies, we should not destroy our democratic institutions and heat the polity for selfish reasons. Let us all learn from history.

9. The Senate President is a law abiding citizen who will not do anything to undermine the judicial process and authority. However, Dr. Saraki will always act to protect his fundamental human rights.