Home News Daura residents file out to greet President Buhari as he treks to... 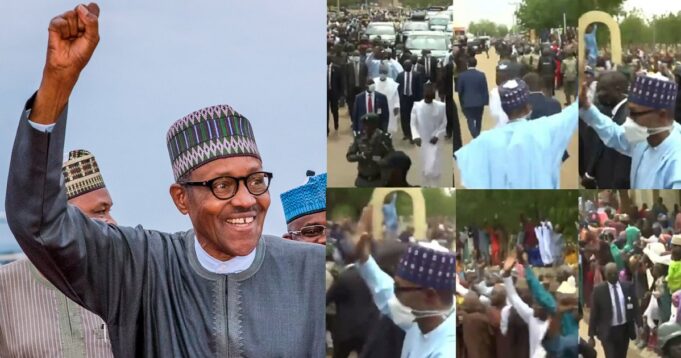 President Buhari observed his Sallah prayers at the Eid ground in his country home, Daura, in Katsina State, today, July 9, and a large crowd of residents turned out to cheer and greet him as he walked back to his residence.

The president had arrived Daura for the Eid-el- Kabir, on Friday evening, July 8.

Buhari had earlier arrived the Umaru Musa Yar’Adua International Airport, Katsina, from where he was flown to his hometown in a helicopter.

He landed at Daura just before six in the evening to the enthusiastic welcome of the Emir, Alhaji Faruq Umar, and other significant figures in the town.

Watch video showing the moment residents file out to greet President Buhari after the Sallah payers below,

In other news, the Federal Government has released the names and pictures of the 64 Boko Haram terrorists who escaped from Kuje Medium Security Custodial Centre in the Federal Capital Territory, Abuja.

It was gathered that it was a coordinated attack by the terrorist group to release their embattled colleagues being held in the facility.

The Nigerian Correctional Service have now declared wanted all the 64 Boko Haram terrorists who escaped. Their personal information was released by the Service Public Relations Officer, Abubakar Umar, on Friday July 8.