Home Viral Family of 5 escaped unscathed after trailer crushed their car in Jos... 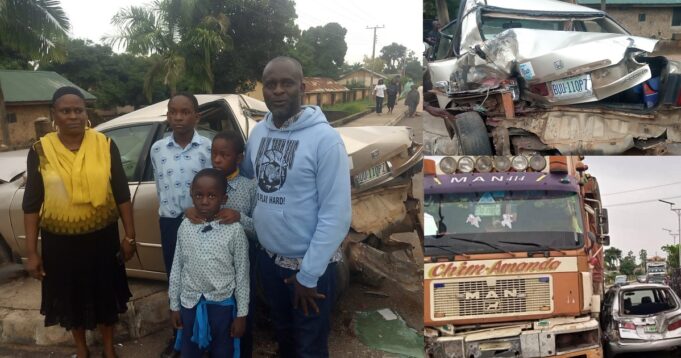 A family of five is lucky to be alive after a trailer rammed into their car along Hill Station Junction, Jos Plateau State on Monday, July 4.

The pastor, his wife, and three children gracefully survived the accident unscathed.

According to the pastor identified as Emmanuel Abu, who took to Facebook to recount how his family narrowly escaped death, they were all in their car when the trailer driving at top speed rammed into them on Monday evening.

“MY WIFE AND MY THREE CHILDREN WERE RIGHT INSIDE THIS VEHICLE WHEN A TRAILER ON A HIGH SPEED DROVED INTO US THIS EVENING IN A HOLDUP AT HILL STATION JUNCTION, JOS. THIS IS QUITE UNEXPLAINABLE & UNBELIEVABLE BUT THE ALMIGHTY GOD IN HIS INFINITE LOVE & MERCY, DELIVERED US ALL AND GAVE US A RESOUNDING VICTORY OVER THE PLANS OF THE ENEMY. NOT EVEN A STRAIN OF OUR HAIR FELL TO THE GROUND. INDEED, THIS CAN ONLY BE GOD. HALLELUJAH! THANK YOU JESUS”. He wrote.

In other news, on angry mob on Monday, July 4th, set two suspected ritualists on fire for allegedly raping a 10-year-old girl to death in Ede-Oballa, Nsukka Local Government Area of Enugu State.

According to a source from the community who spoke with The Sun, the girl who was the daughter of one late Philip Ugwu of Umuidu, went missing few days ago and was later found dead in a nearby bush with her eyes, breast and private parts removed. Read here.