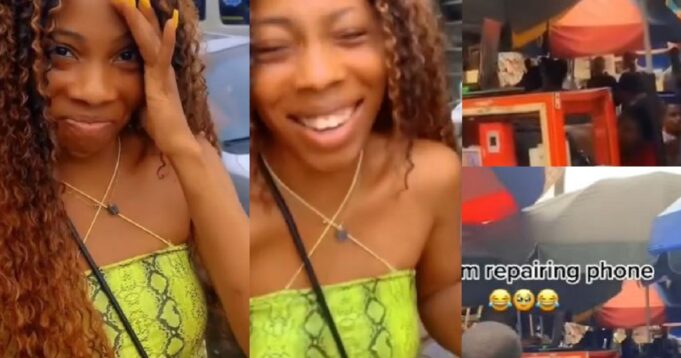 A video of a young lady mocking her admirer after she discovers he’s a phone repairer has gone viral and stirred reactions from netizens.

The lady in the video narrated how she met the young man at a club the night prior and was shocked to discover he repairs phones for people at the market where she had gone shopping.

According to her, the young man approached her at the club and they exchanged phone numbers. She claimed the man presented himself as a big boy at the club as he showered her with wads of cash.

However, it was to her utmost shock to see him by his stall repairing phones at the market the next day.

Narrating the encounter, she wrote,

“Omg I saw the guy that toasted me in the club yesterday repairing phone in the market. He even sprayed me money forming big boy and collected my number. See him repairing phone”.

Reacting to the video an Instagram user @lit__queen2 wrote, “Most girls do the most 💯💯 that guy might buy your full future someday 💯”.

@mii_ra_belle, “I’m confused. So he can’t go to the club cause he repairs phone?? Omo nawa o”.

@wendy_adamma, “If they yab her now she go dey scream depression”.

@faustinadung, “Person way no even get work dey insult another person hustle😂😂”.

@marie.rose_julie, “She has no idea of what dignity in labour means….clout”.