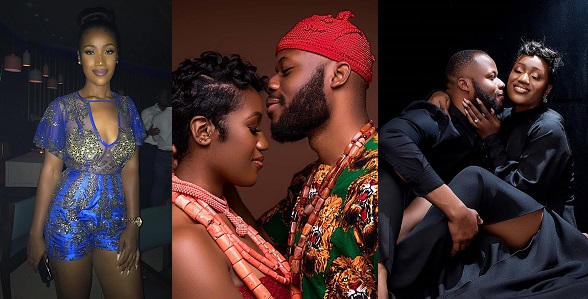 A Nigerian lady simply identified as Adaeze has narrated the fascinating story of how she met her husband, Dozie at the club.

In her chat with Bellanaijaweddings, the beautiful lady revealed she and her friends had gone to the club and she was the most stunning lady in there that night.

According to Adaeze, she and her friends joined the table of their male friends and Dozie was at that table.

She noted that while other guys were trying to get her attention by saying sweet words to her, Dozie calmly cheered her up instead and made sure she was having fun.

The new bride also noted that he only had a bottle of water because he does not drink alcohol.

Adaeze said when she was leaving the club and going to another one with her friends, Dozie collected her phone number to ensure that she got there safely and that was how their relationship started.

The couple tied the nuptial knot on Saturday, October 31.

See their prewedding photos below,

I walked into the club with my friends and I was the hottest thing in the club that night, all the guys were all over trying to get my number, numbers were flying from all corner. My friends and I joined our male friends’ table, Dozie happened to be on that table. While other guys were trying to spit lines and all?, Dozie came to me as the hyper guy that tried to cheer me up and was sure I was having fun. Dozie had so much energy, I remember asking him if he had drank and he told me, No, I don’t drink. I also remember him holding a bottle of water but still, he was so energetic, he wasn’t trying to spit lines so I became more relaxed with him. When I was leaving with my friends to the next club, he asked to drop me off but I drove, so he asked for my number to be sure I got to the next club safe. See more on https://www.bellanaijaweddings.com/ada-chidozie-add2020-prewedding/ or via link in bio Bride: @daeziie @daeziie_faces Groom: @astroglobe_estates Planner: @shamol_experience Photography: @charliel_photography #BellaNaijaWeddings