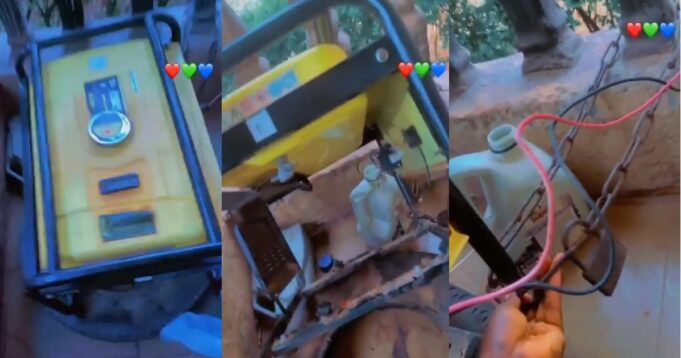 A Nigerian lady has taken to social media to share a video of what was left of her generator after it was descended on by thieves.

The lady said she woke up to see that the engine and other major components of her generator had been stolen by thieves despite being chained.

In the trending video, the lady who was surprised by the incident, showed the skeletal structure of what was left of her generator and said she has never seen such a thing before.

In other news, a Nigerian lady has narrated how her cleaner told her she can’t come to work because she was under the influence of a drug or alcohol.

The lady, identified as Grace Chibueze-Okere, took to Facebook to reveal that her cleaner didn’t show up to work so she called her phone repeatedly to ask for the reason behind her absence but she didn’t pick up.

Much later, the cleaner sent her a text message saying she was still hungover from the drug or alcohol she took the previous night and needs time to fully recover.

Grace who seemed dazed by the cleaner’s response, pointed out that the cleaner gets paid for her job and questioned if she’s supposed to make provisions for when she’s high.