Home Viral “No woman can snatch him” – Woman brags as she reveals she... 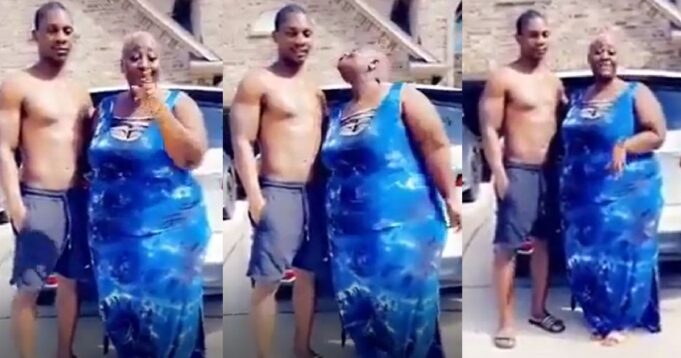 A woman has raised eyebrows online after she admitted to hypnotizing her lover with a charm to make him submissive and forever loyal to her.

The beautiful plus-sized woman took to social media to show off her Cameroonian lover, whom she simply identified as Michael, while bragging that no woman can snatch him from her.

She went on to disclose that she had locked him in a juju bottle and, as a result, he does not cheat, whereas she cheats on him with other men.

She boasted about how powerful the charm she placed on him is, guaranteeing that no woman would be able to take him away from her.

“Michael don’t cheat on me I decided to cheat, its my business, the kind of juju bottle that I have lock him inside no woman can snatch am. Michael is faithful to me. Me I cheat that doesn’t mean Michael cheat, he’s faithful to me”, she said.

In other news, Nollywood actress, Eucharia Anunobi has retracted her earlier statement in support of premarital sex.

The self-styled evangelist had in a video shared on her Instagram page said people who advise engaged couples against having sex before marriage are out of their minds.

According to her, it’s pure wickedness to tell single folks not to engage in premarital sex as they would not be able to test their sexual compatibility with their intended spouse.

The video was met with mixed reactions from social media users who disagreed with her stance while others opined that she was being sarcastic.

Well, the thespian has now shared a follow-up post where she made a U-turn on her previous statement.

She said dating is not a time for sexual intercourse, but a time to get to know your intended partner.