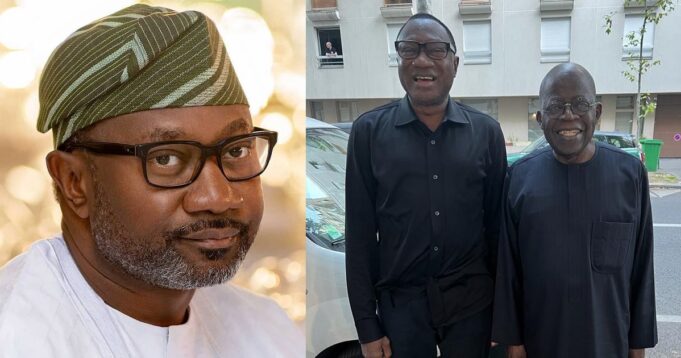 Billionaire businessman, Femi Otedola has thrown his weight being the presidential candidate of the All Progressives Congress (APC), Asiwaju Bola Ahmed Tinubu.

The business tycoon paid a courtesy visit to the former governor of Lagos state in Paris, France, and took to his Instagram page to share a photo with him.

Otedola also prayed for God to grant Tinubu’s desire to become the next President of Nigeria.

He captioned the picture,

“I am always excited visiting my Great Friend Asiwaju Ahmed Bola Tinubu. May God grant him his heart’s desire in becoming the President of this great Nation …F.Ote💲”

The oil magnate took to his official Instagram page to show his approval. To the delight of fans and followers, he shared a photo with the newly engaged couple.

In the photo, Otedola was flanked on both sides by his daughter, Temi, and her husband-to-be.

While placing a palm on her father’s chest, the billionaire daughter and actress showed off her engagement ring.

“Eazi does it,” Femi Otedola captioned the photo.