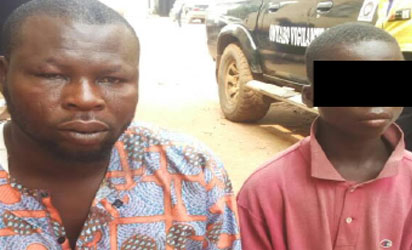 A fake blind beggar, Abdullahi Abbas, who was apprehended in the Ikorodu area of Lagos state yesterday August 21st, has confessed to making between N5,500 and N8,000 daily just by disguising as a beggar.

37-year-old Abdullahi who is always led by a 12-year-old boy (name withheld), begged for alms every day at the First Gate and Odogunyan area of Ikorodu.

He was apprehended yesterday after an inquisitive resident of the area, Adeoye Baliks, engaged him in a conversation that made her raise an eyebrow. According to Vanguard, she raised an alarm and the man was examined by passersby and it was discovered that he was not blind.

When interrogated, Abdullahi who is from Oyo state, said he belongs to a group of beggars who feign various types of deformity just to get people to sympathise with them and give them money. But for the timely intervention of the vigilante group members in the area, the mob that had gather gathered were in the process of lynching him. He was rescued and then handed over to the police in Sagamu.